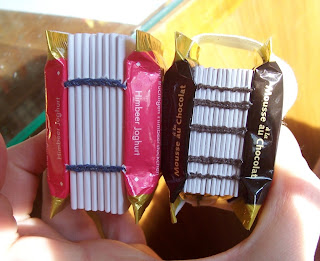 It has been while now since I cut and sanded down cardboard/wooden chocolate pieces. I wrote an entry here about it. The initial plan was to integrate my own chocolates recipes in the booklets. But I did not seem to be able to set the text in a pleasing way. That lead to me discarding the idea altogether. But I still had all these 'chocolates' and thus decided to make a new (third) batch of the blank Ritter Sport Mini Books that I made last year.

Over the time some problems with these first and second batch became apparent: 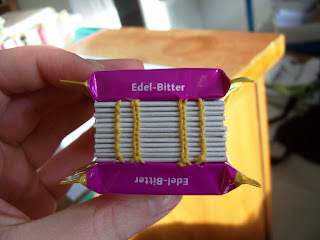 If you take a close look (click on the image for an enlarged image) you can see that the thread tears out of the chocolate foil. This is because a) the thread only loops around the thread on a earlier signature without locking - I can do this better by now, and b) the reinforcement I used for the foil (filmoplast) was insufficient. 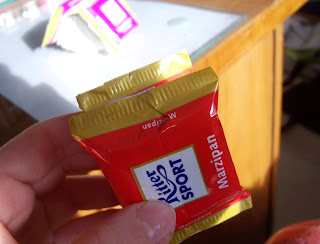 There are more problems. I had the books on display and all but one of them are ripped. People tend to squeeze and pinch the package in trying to determine whether there is still chocolate in the covers and the foil does not stand this strain. Again I figured, I need to strengthen the foil in some way.

And yet another problem was that the covers opened every now and then at the seams. I had used double sided tape to close them and one could easily push it back together, but still I found this very dissatisfactory. So this time I wanted to do better. 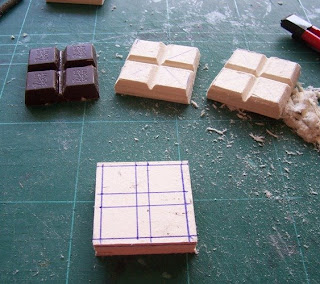 I made this much better models of the chocolate so that it should feel much more like chocolate than with the initial books. I glued the foil to a piece of paper before further proceeding with the binding. And I improved the binding itself. The result can be seen on top, right next to one of the second generation - very ugly. I thought it would be good to have the pages not the size of the chocolate but of the covers. Now I see that this was a bad decision. Also I made the signatures thicker, so that the bulk at the binding should be less. O.k., the bulk was less, but the finished product looks so much less than a mini book! And finally, the paper on the back of the foil makes it a lot sturdier - but you can no longer feel the fake-chocolate inside. I could just as well not have shaped them at all, but simply put a piece of wood inside.

So I'll take this apart again. I think I'll go for the small pages, and sewing station like in the first generation (the pink book). I'll glue paper to the foil, but I'll try a very thin Siam paper (5g per square meter) instead of the office paper (80g per square meter) that I used for the first.
I hope this will work better.
I'll let you know when there are new developments...

Thanks for reading!
Posted by Büchertiger at 10:01 AM

Those are so cute! I hope you find a way to make them work because I want one. :)

Thanks, that provides encouragement ;-)

I'm already on it. The Thai paper seems to work well. You'll here from them again.

It seems a shame to hide such clever carving in a wrapper. How about drilling through the 'chocolate' itself and sew directly on to it?

Just a though if the wrappers are proving so trickey.

They are superb pices of chocolate though! REALLY realistic.

I thought about sewing the book on cords which I would then attach to the covers though the chocolate bits. Maybe I'll still try that, but it does not make it less necessary to secure the foil against easy tearing. If you pierce this foil at any point the rip will just so easy propagate!

Or did you mean I should do it without the foil? Ah, but the whole effort is there to have the foil attached in a nice way...
I think the Thai mulberry paper I used now worked well enough.

But maybe I *should* think about the suggestion... I'll see